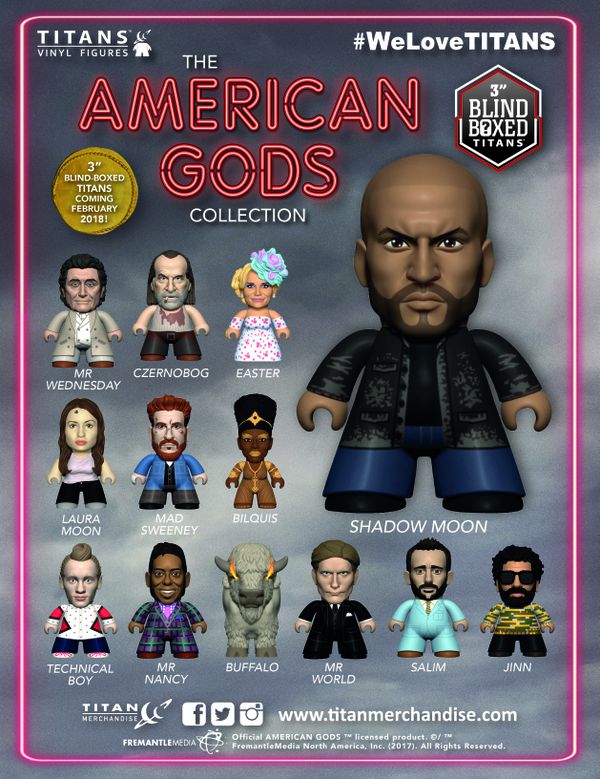 COMING IN FEBRUARY 2018.
“There’s always been a god-shaped hole in man’s head.”

Bryan Fuller’s beautifully quirky, violent, quirky and mind-expanding first season of American Gods, based on the award-winning novel by Neil Gaiman, will be appearing as 3" TITANS blind-box collectibles from February 2018, fresh from the Realm of the Gods (Old and New)!

Boasting his iconic bodyguard outfit, Shadow Moon heads up this Season One collection, which also features the cryptic-but-charismatic Mr Wednesday, the charm-crazed leprechaun Mad Sweeney, the elegant & prophetic Mr Nancy, the deathly volatile Czernobog - plus the all-knowing embodiment of the New Gods: Mr World. Laura Moon also joins this first wave of American Gods TITANS, alongside two mind-bending supernatural figures from season one: the fiery Jinn and The Buffalo.

Each figure is 3” blind-boxed - and some of them come with a character-specific accessory.

PLUS: 3 rare chase figures (and one super-rare - and even one ultra-rare - chase figure) for you to hunt and collect!

“Either the world is crazy or you are”