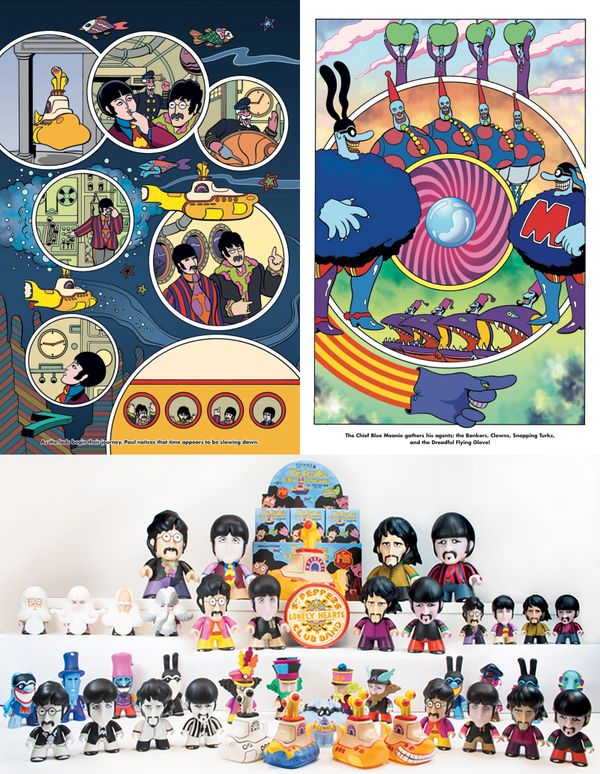 Apple Corps and Titan Entertainment expand their relationship and set sail for the Sea of Green with a range of 50th anniversary Yellow Submarine projects!

Written and illustrated by Bill Morrison for the film’s 50th Anniversary in 2018!

Titan Comics is excited to announce a deal with Apple Corps Ltd to publish an official graphic novel adaptation of The Beatles’ iconic animated film, Yellow Submarine. Due to hit stores in 2018 to tie-in with the 50th Anniversary of the release of the movie. The deal was brokered by Bravado International, The Beatles’ North American licensing agent.

The Beatles: Yellow Submarine movie (originally released in 1968) is an animated musical fantasy film inspired by the music of The Beatles. In the film, Paul, John, George and Ringo agree to accompany Captain Fred in his Yellow Submarine and go to Pepperland to free it from the music-hating Blue Meanies.

Directed by animation producer George Dunning, the film received widespread acclaim from critics and audiences alike. Since its original release, the movie has become a cornerstone of contemporary popular culture and has inspired generations of award-winning animators.

Titan’s official graphic novel adaptation of The Beatles: Yellow Submarine is written and illustrated by Bill Morrison – writer and artist from The Simpsons Comics. As a huge fan of The Beatles, this has been a labor of love for Bill, twenty years in the making.

“We’re thrilled to be publishing The Beatles: Yellow Submarine for the 50th Anniversary of this fantastic movie,” said Chris Teather, Publishing Director at Titan Comics. “We can’t wait for Beatles fans to experience this official adaptation.”

The Beatles: Yellow Submarine Official graphic novel adaptation from Titan is due to hit stores in 2018.

More announcements are due shortly on this exciting project.

ONE, TWO, THREE, FOUR CAN I HAVE A LITTLE MORE?! TITAN MERCHANDISE ANNOUNCES THEIR THIRD WAVE OF YELLOW SUBMARINE TITANS!

Titan Merchandise is proud to sail the ship, chop the tree and announce their third wave of releases in their deal with Apple Corps Ltd to produce an ongoing range of their award-winning TITANS vinyl collectibles, based upon The Beatles’ ultra-psychedelic cartoon classic, Yellow Submarine. The deal was brokered by Bravado International, The Beatles’ North American licensing agent.

Hot on the heels of their just-released Sgt Pepper 50th Anniversary 4.5” window-boxed TITANS set (featuring the Fab Four in their animated Lonely Hearts Club Band uniforms alongside the iconic Sgt Pepper drum), they’re releasing a second 3” blind-box wave, The “All Together Now” Collection, sailing out of Titan HQ in July 2017!

Featuring the Fab Four in both glorious black & white and as their older selves (you know, when they are 64)! Plus some more crazy Blue Meanies and their wild partners in badness - the Apple Bonker, the Snapping Turtle Turk & the fearsome Four-Headed Bulldog – alongside some funky new Yellow Submarine variants!

Each TITAN is 3” blind-boxed and there are 2 hidden chase figures in every 18-figure PDQ (or counter display case, if you're from Merrie Olde England) for Beatlemaniacs to hunt and collect!

Andrew Sumner, EVP of Titan Merchandise, said: “We’ve been blown away by the response to our Yellow Submarine TITANS and the incredible support we’ve had from both Apple Corps and Beatles fans all over the world. Our third wave of Yellow Submarine TITANS items is a big thank you for all that support – with love from us to them. And we’re only getting started – wait until you see what’s coming for Yellow Submarine’s 50th Anniversary in 2018!”

WELCOME BACK TO PEPPERLAND! ALL TOGETHER NOW!