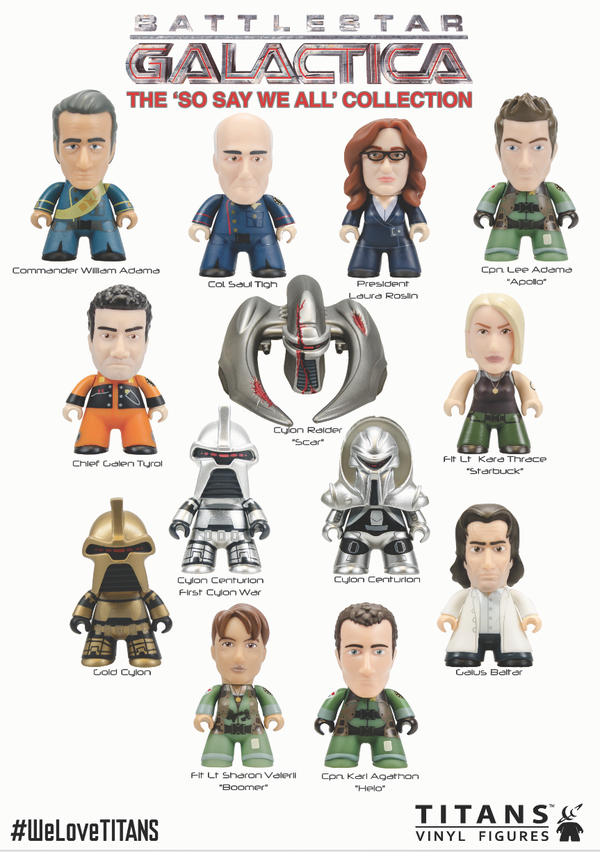 Titan Merchandise are very excited to announce that our long awaited Battlestar Galactica TITANS are coming out very soon! You can pre-order now at https://forbiddenplanet.com/?q=battlestar+galactica+so+say+we+all and http://www.entertainmentearth.com/hitlist.asp?searchfield=battlestar%20galactica%20titans&eeshop=

This set celebrates Battlestar Galactica’s epic struggle for survival as humankind flees from the merciless Cylons and struggles to find a new home in the depths of space. The set includes some of the show’s most popular characters: the brilliant-but-narcissistic-and-self-preserving Dr. Gaius Baltar, ever-evolving Viper pilot Kara “Starbuck” Thrace, President of the Colonies Laura Roslin and legendary military leader William Adama. Also included is a deadly Cylon Centurion and the infamous Cylon Raider “Scar”.

Each figure is 3” blind-boxed.

PLUS: 3 hidden chase figures for you to hunt and collect!