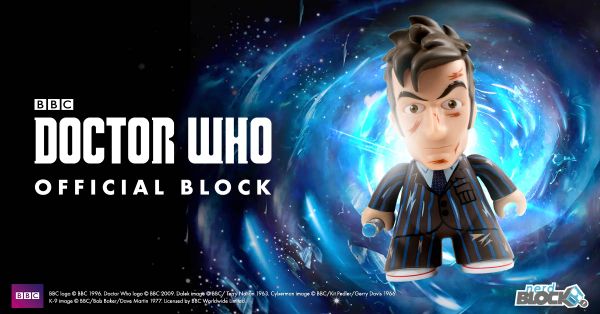 Spoiler alert! Do not proceed unless you wish to discover one of the incredible timey-wimey treasures contained within May’s Doctor Who Official Block!

Nerd Block is thrilled to reveal that this month’s Doctor Who Block features an exclusive Tenth Doctor item! Our team worked with Titan Merchandise to secure this variant figure for our subscribers, which can only be found in the Doctor Who Official Block.

Doctor Who Official Block Lead Buyer Nicole Giffen explains her choice to include the figure in the first Block: “David Tennant is one of the most-beloved Doctors, so we couldn’t wait to include an exclusive variant figure of the Tenth Doctor in our Block,” she says, “Showing the Doctor in his battle-worn state is an ode to the episode T he End of Time Part Two , where he fights against the returning Time Lords. It’s one of my favorite scenes, and the figure captures the Doctor perfectly.”

We also had the opportunity to speak with James Watson of Titan Merchandise for more about this outstanding Battle Deco Tenth Doctor vinyl figure: What was your inspiration for this Tenth Doctor variant figure?

We're big David Tennant fans, and we wanted something special for the first Doctor Who Block! We wanted to give the fans something that would look great on a shelf (hence the larger scale) as well as pay tribute to an iconic moment in the show's history!

How did you narrow down the look with such a large amount of source material?

It wasn't easy! The Tenth Doctor has gone through a huge number of different looks (something fans of TITANS will agree with - we've produced more Tenth Doctor variants than any other character!) but we wanted to go with something that represented more than just a costume change. The Tenth Doctor's final moments are not only hugely emotional, but capture the Doctor at his very best. He manages to survive the Master and the Time Lords, but ends up sacrificing his life to save one person - his friend Wilf!

How much did the design change from conception to creation?

Luckily, not much! We've been producing a Tenth Doctor TITAN for a number of years - the original designs were approved by David Tennant at the start of TITANS history! And we had a lot of help from the BBC in getting this design approved.

What is your favourite part of designing a new figure?

I love every stage! From picking out the design, to receiving the initial 3D renders to finally having a figure of your favourite Doctor that you can put on your desk!

What is the best part of working within the Doctor Who universe/license?

We're all colossal Doctor Who fans, so the best part is being able to talk about Doctor Who all day! Plus being able to interact with not only the cast and crew, but the fans! There's a real joy in being able to produce actual physical pieces of all my favourite characters!

What's next for Titan in terms of Doctor Who ? (If you can give us any hints!)

We will be announcing our next Doctor Who blind-box wave very soon. I can't say too much, but it'll cover the show's history and will feature some characters that we have been asked about for YEARS! I've seen the designs and I'm incredibly excited to reveal them. Watch this space!

Want to get your hands on more awesome exclusive Doctor Who items like this one? Subscribe to the Doctor Who Official Block today so you won’t miss out on any wibbly wobbly collectibles, exclusive apparel and merchandise from your favorite Doctors!

Visit nerdblock.com/doctor-who to get your very own Doctor Who Official Block!