Titan Merchandise are proud to announce that our 11th Doctor TITANS have been nominated in this year's Designer Toy Awards, presented by Clutter Magazine.

We are nominated in two categories: Best Mini Series and
Best Media Tie-in.

The Designer Toy Awards (DTAs) are the leading awards honoring excellence and innovation in the Designer Toy community. Established in 2011, the DTAs are presented by the Clutter Media Group — a leading informational organization within Designer Toys, an industry that, after more than a decade, has become a prominent form of artistic and commercial expression, as well as a leader in global trendsetting. 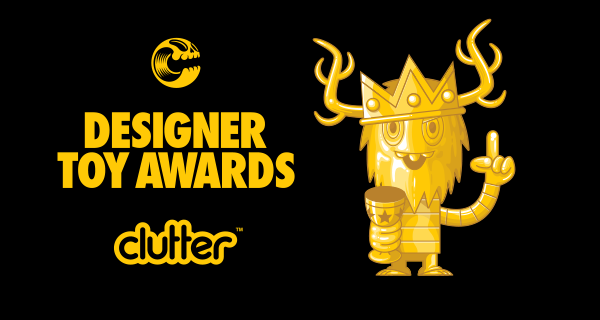 Reflecting the tremendous and ongoing growth of the Designer Toy community, the DTAs celebrate the best of the industry’s artists, designers and brands, as well as honoring those involved in championing Designer Toys throughout the world. Members of the DTA Board select the majority of finalists and winners in each category from the nominees, however you — the online community — determine finalists and, in some cases, winners by voting for nominated work, individual or brand that you believe to be the best in each category. Each year, the DTAs bring together the Designer Toy community all over the world.

Titan Merchandise are incredibly proud to be nominated for our Doctor Who TITANS. Our groundbreaking collaboration with BBC Worldwide, featuring designs curated by Lunartik, has galvanised not only fans of Doctor Who around the world but also artists and collectors throughout the vinyl community.

The categories we are nominated in are voted for by the public, so we'd appreciate your support! Please sign up HERE and vote for us in Best Mini Series and Best Media Tie-in. You can vote once every 24 hours, so please keep coming back!

If you need inspiration, see below for a few reasons why our great figures were nominated! Thanks for your support!

Also, while you're at it - why not buy yourself a figure or two from
Forbidden Planet, and other Specialist Retailers